What Is Dark Chocolate?

Dark chocolate can be as simple as cacao beans refined into a smooth paste, called 100% dark chocolate. But cacao can have a bitter flavor, so chocolate makers usually add sugar, sweetening the chocolate and smoothing out harsher flavors. Some makers also add extra cacao butter, to further refine and coax out more complex flavor notes. Cacao percentage in dark chocolate can as low as 50%, but it’s still often praised as being the healthiest chocolate due to the bioavailability of its antioxidants and minerals and nutrients.

What Is Milk Chocolate?

To combat the norm that all milk chocolate is sweet and must contain dairy, craft chocolate makers (LINK) have introduced “dark milk” chocolate. It’s often 45% cacao or higher, and made with too low a percentage of milk solids to legally call it milk chocolate. Sometimes it contains zero milk solids, rather made with alternative creamers such as coconut milk or oat milk. Legally these are dark chocolates with milk as an inclusion, but even a small amount of added milk can completely transform a chocolate’s flavor.

What Is Milk Chocolate?

White chocolate is cocoa butter plus milk powder and sugar. It’s different from milk chocolate in that it contains no cocoa solids, and up until 2002, it wasn't legally considered chocolate in the United States. White chocolate doesn’t contain any cacao solids, which are the part of the plant containing all the nutrients and antioxidants, so it often receives the complaint that it’s not “real chocolate.” But part of that issue is historical; since there was no legal definition of white chocolate for decades, a variety of products (some with no cocoa ingredients whatsoever) were marketed under that moniker.

Real cocoa butter contains a chocolaty aroma and a large proportion of healthy fats. Since it melts at body temperature, it’s valuable within the cosmetics industry. Low-quality cacao butter concentrated in the food industry, the chocolaty aroma removed to further distance it from milk and dark chocolates. It became easier to dilute with cheaper fats and excess sugar, making it seem less like chocolate and more like milky candy. Once white chocolate was legally defined by the FDA, the landscape of flavors offered in white chocolate began to shift towards more of the creamy, chocolaty bars on the market today

Other Types Of Chocolate

While the hype around Valrhona's blonde chocolate died down years ago, Callebaut's ruby chocolate is still very new to the market, released in 2017. Ruby chocolate is different from other milk chocolates because it’s made with cacao processed proprietarily, removing any traditional chocolaty flavor. Somewhere in that processing, the bright purple tones of the unprocessed “ruby cacao” seeds are preserved using acid, lending the chocolate its signature pink. Ruby chocolate’s been highly criticized since its debut, and up until recently, it couldn't legally be called chocolate in the United States.

If you are looking to impress someone with exotic, delicious chocolate you have come to the right place. Besides, Pashmina is a passionate business owner and smart woman.

Add to Wishlist
0
Product has been added to your wishlist
You can view your wishlist by creating account or logging-in an existing account.
Please create account/login through {{ customer_email }} email
Login Register
0
★ Judge.me Reviews

Very bright/fruit forward with almost some tang to it. Dark/rich background. Very good.

The texture on this chocolate is so smooth and melts in your mouth. Fruity notes.

Sweden’s Standout Chocolate really does standout from the crowd! The dark chocolate they make is bright and expressive across their entire line, but it’s the flavored chocolates that really shine. The Spruce Shoots is uniquely Scandinavian but you don’t need to be Swedish to enjoy the berry like flavor. The Euro Blueberry ( AKA bilberry) and the Currant are similarly a great pairing of fresh tasting fruit and smooth dark chocolate. A nice balance of familiar and exotic for folks who want to try something a bit different but aren’t yet ready to try Norwegian Fjak Reindeer Moss or Gjetost (brown caramelized goat cheese) chocolates.

I wanted something really special for decorating my most recent birthday cake (delightfully decadent chocolate mousse cake from the local fancy grocery store) and these little beauties were absolutely perfect- they gave both whimsy and an extra oomph of deliciousness. Expensive- absolutely, would I get them again? For a really special occasion, yes! 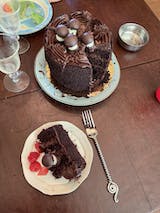 The blueberry comes through as the chocolate melts in your mouth. Absolutely fantastic flavor and consistency. Addicting!